Reap the fruit of your labor and enjoy a well-deserved day off!

After many years of putting off retirement Ron finally decided to start enjoying longer visits with his family and extended vacations so an agreement was reached with Erik Kafarski CEO of Aactron for Aactron to acquire the assets, jobs and customers of Tru-Coat.  In the deal, which includes two automated processing lines, are various specialized racks, fixtures and handling equipment.  With this acquisition, Aactron will not only pursue adding to its already developed manganese phosphate base but also to enlarge its other product lines, like Alodine (pretreatment for aluminum), calcium modified micro zinc and other phosphates.

“I have been working with Aactron for the past 8 years and they have been an amazing partner for all my coating applications and custom coating services.” 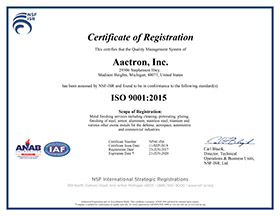